Ever wonder why horses can be so spooky when we don’t expect it? The following blog outlines the equine vision and why they react how they do.

The equine species (horses and ponies) have the largest eyes of any land mammal in the world. They, like many prey species have eyes placed on the sides of their head versus directly in front of them. Eye placement and the shape of their head allows them to have a nearly 360-

degree field of vision. The other 20-degrees include blind spots. The blind spots are located directly in front, which includes between the eyes, the ground where their front feet land, their chest and knees. They also cannot see directly behind them. We’ve all had a horse jump when we didn’t expect it

FUN FACT: Horses and ponies have anywhere from 20/30-20/60 visual acuity. They see better than the average cat with 20/100 visual acuity or dog with 20/75 visual acuity. Horse and ponies don’t see images as detailed as a human with 20/20, but they have a much broader range of sight and they can see when it’s darker. It does take them more time to adjust between light and dark though and couldn’t figure out why. There’s a good chance we were out of their sight and they didn’t know we were there. Many people get kicked or stepped on because of this. 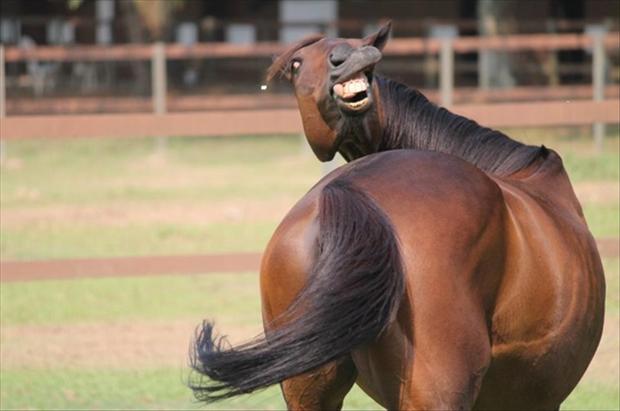 Horses and ponies have two types of vision: binocular vision where both eyes are used to focus on one object and monocular vision, which allows the horse to focus on an object in front with one eye and behind with the other eye. If they see an object they aren’t sure of, they’ll over turn their head to switch from monocular to binocular sight.

When being around horses, remember and respect the dynamics of their sight and senses. Be careful of your surroundings and be sure to stay calm if a horse does spook or react. There’s a good chance it was an instinct and how we react the first time can lead to how they react the next time. As I was once told “be alert, but be calm; be calm, but be alert.”

Camarie Widmer, CEO of RodeoKids.com, has committed herself to providing opportunities for children and families in the western industry. Her first rodeo was at just five days old and she's continued her journey in the industry as a competitor at all levels, coach and multi-business owner.

Your email is safe with us.

We're currently offline. Send us an email and we'll get back to you, asap.

You can find out more about which cookies we are using or switch them off in settings.

This website uses cookies so that we can provide you with the best user experience possible. Cookie information is stored in your browser and performs functions such as recognising you when you return to our website and helping our team to understand which sections of the website you find most interesting and useful.

Strictly Necessary Cookie should be enabled at all times so that we can save your preferences for cookie settings.

If you disable this cookie, we will not be able to save your preferences. This means that every time you visit this website you will need to enable or disable cookies again.